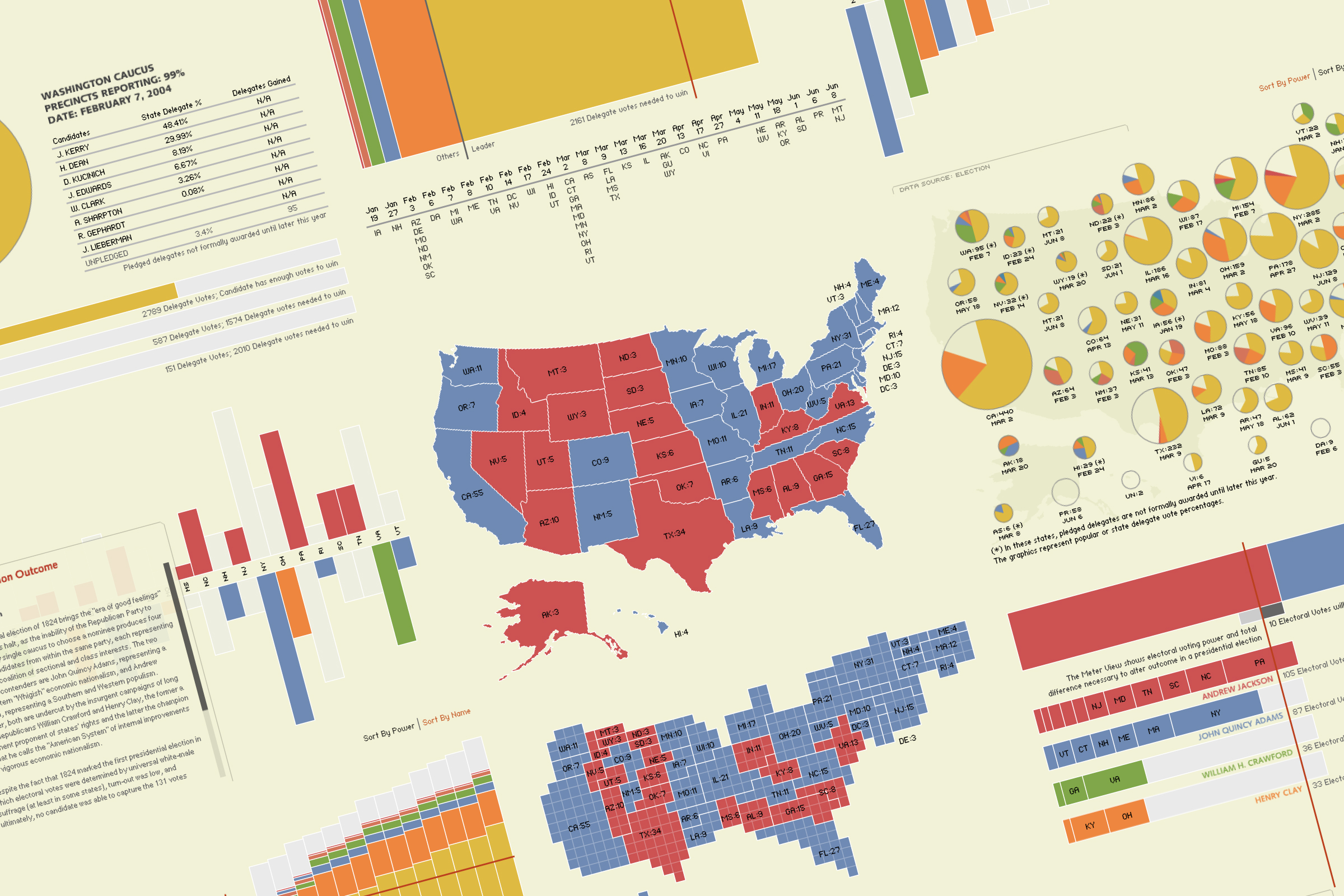 The Public Opinion Tool is a fully interactive data visualization app that contains primary and electoral data and documented public opinions and election issues from 1789. The app lets political scientists aggregate field research with official polling data and track public opinion in real-time as the election process unfolds. In the app's UI, a calculator allows pundits and publishers to set up different hypothetical scenarios and visualize the outcomes in several unique ways.

The Data Visualization team at Parsons Institute of Information Mapping (PIIM) teamed up with the Political Science Research team from The New School, under the leadership of William Bevington and former Senator Bob Kerrey. The goal was to create a tool that integrated real-time polling data and current research analysis with powerful, real-time visualizations of election outcomes.

In 2004, there were no online interactive election mapping tools on the web, so we had to create a first in this category. The web, at the time, was still in its 1.0 phase (before jQuery, JSON, etc.), the semantic dark-ages, with no real feasible "native web" solution for creating rich, interactive, data-driven, browser-based experiences.

We built a backend, which let researchers post their field-data, using Excel templates and new, complementary data from Forrester. The data was loaded incrementally, in aggregate form into Flash, as XML, and used by the tool to visualize any previous or current election state, including unique country maps for some past elections.

This project fully integrated my past as an engineer with my current as a product designer. We explored the outer limits of what could be achieved with massive data sets in Flash and supporting real-time field data coming in from multiple researchers across the country.

In subsequent elections (2008, and 2012), these tools were used as the center-piece for editorial content around elections at all the major institutions (NYTimes, CNN, FOX, etc.)

We were ahead of our time in all kinds of ways. 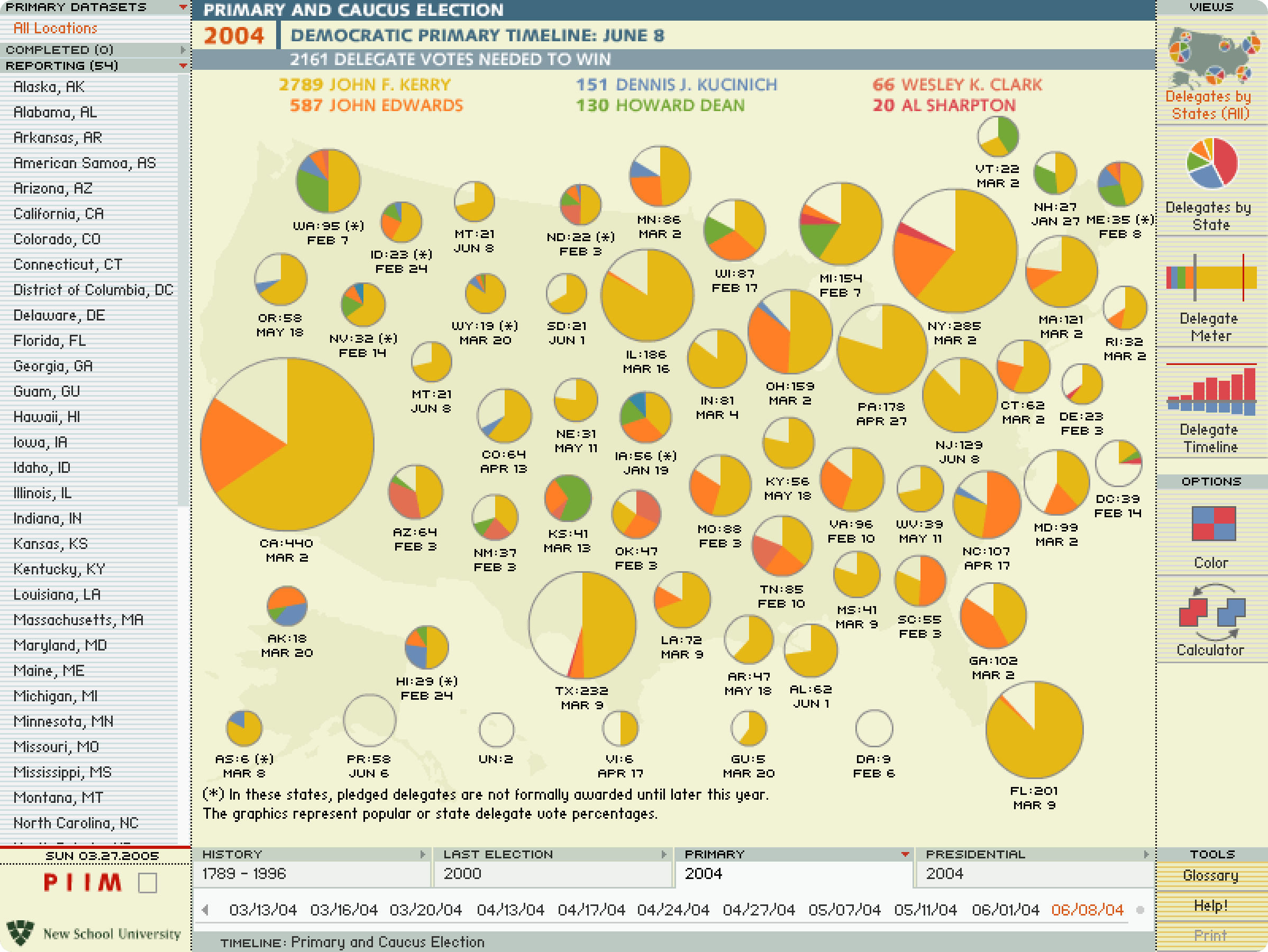 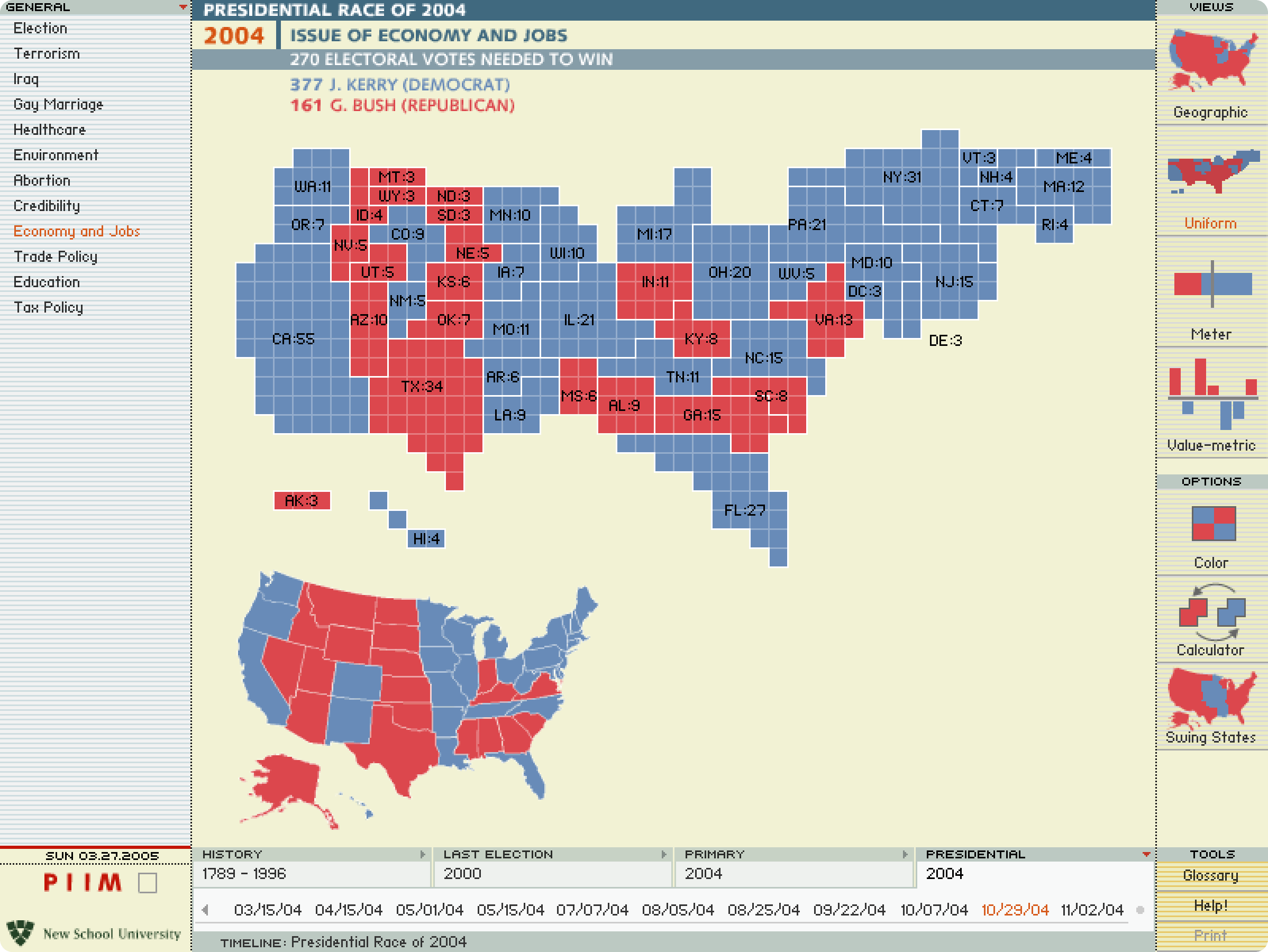 For electoral mapping, the familiar country map is the primary canvas. For a more critical review of actual and potential votes distribution, specific views visualize the impact of electoral outcomes. 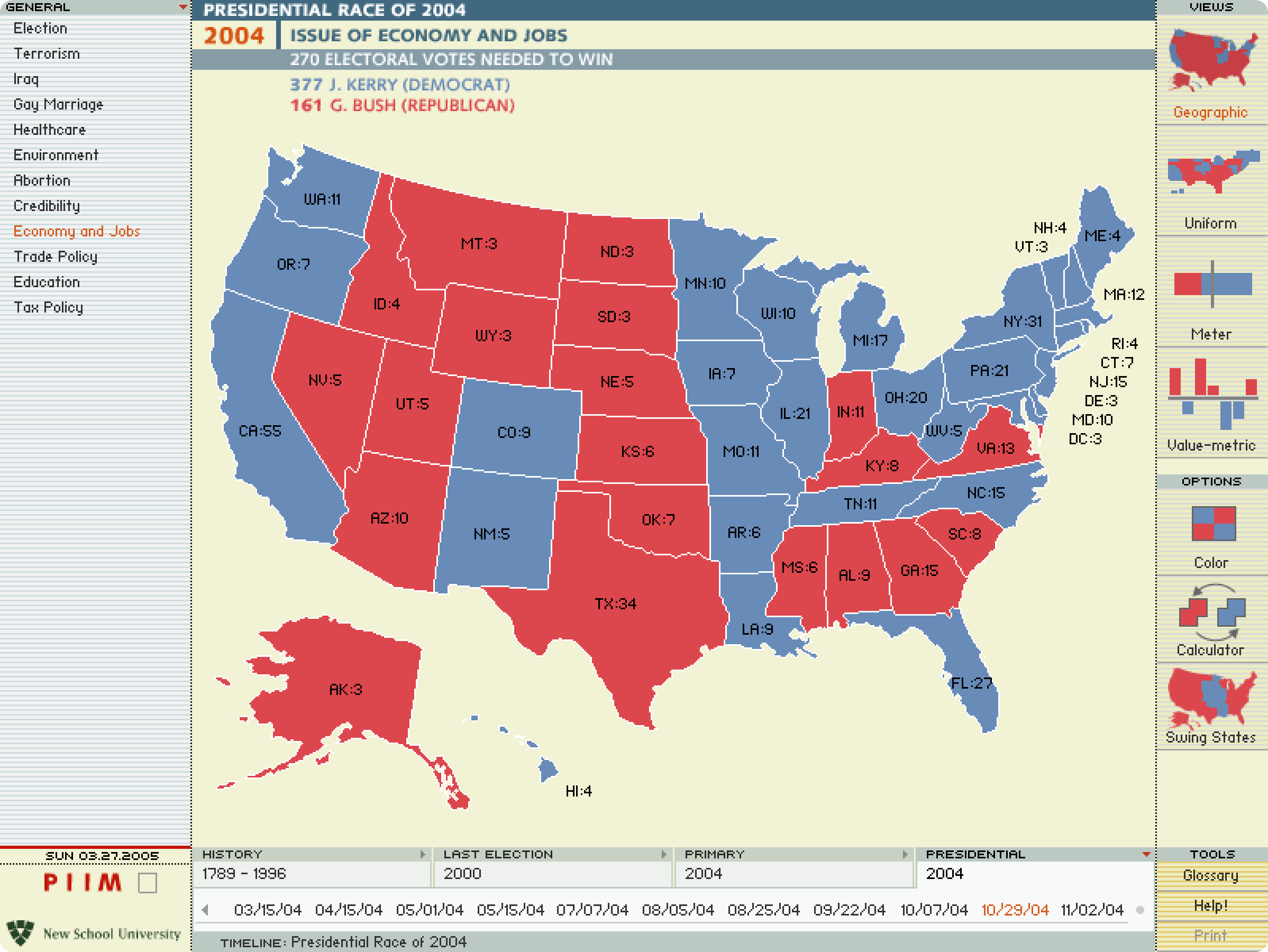 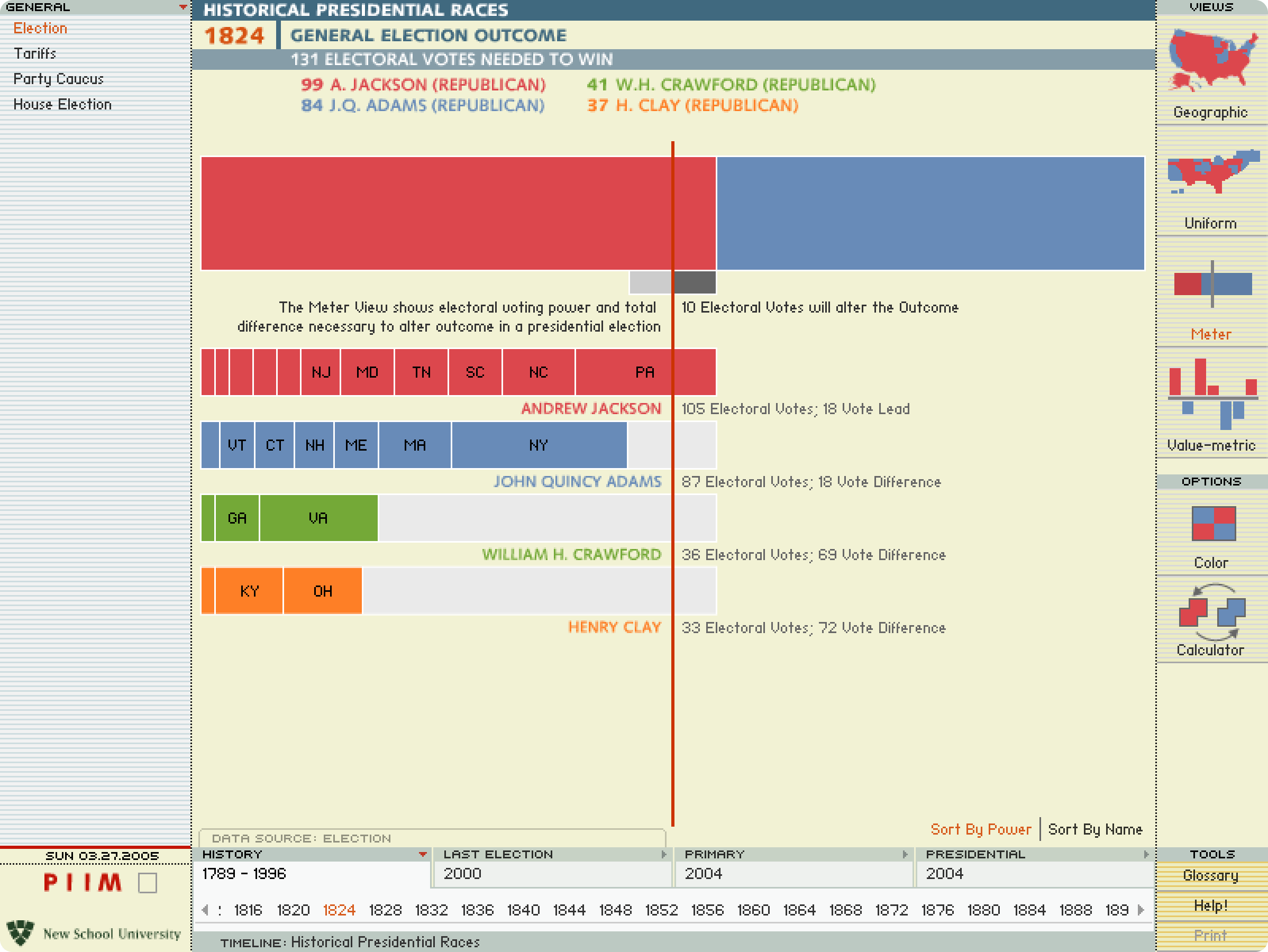 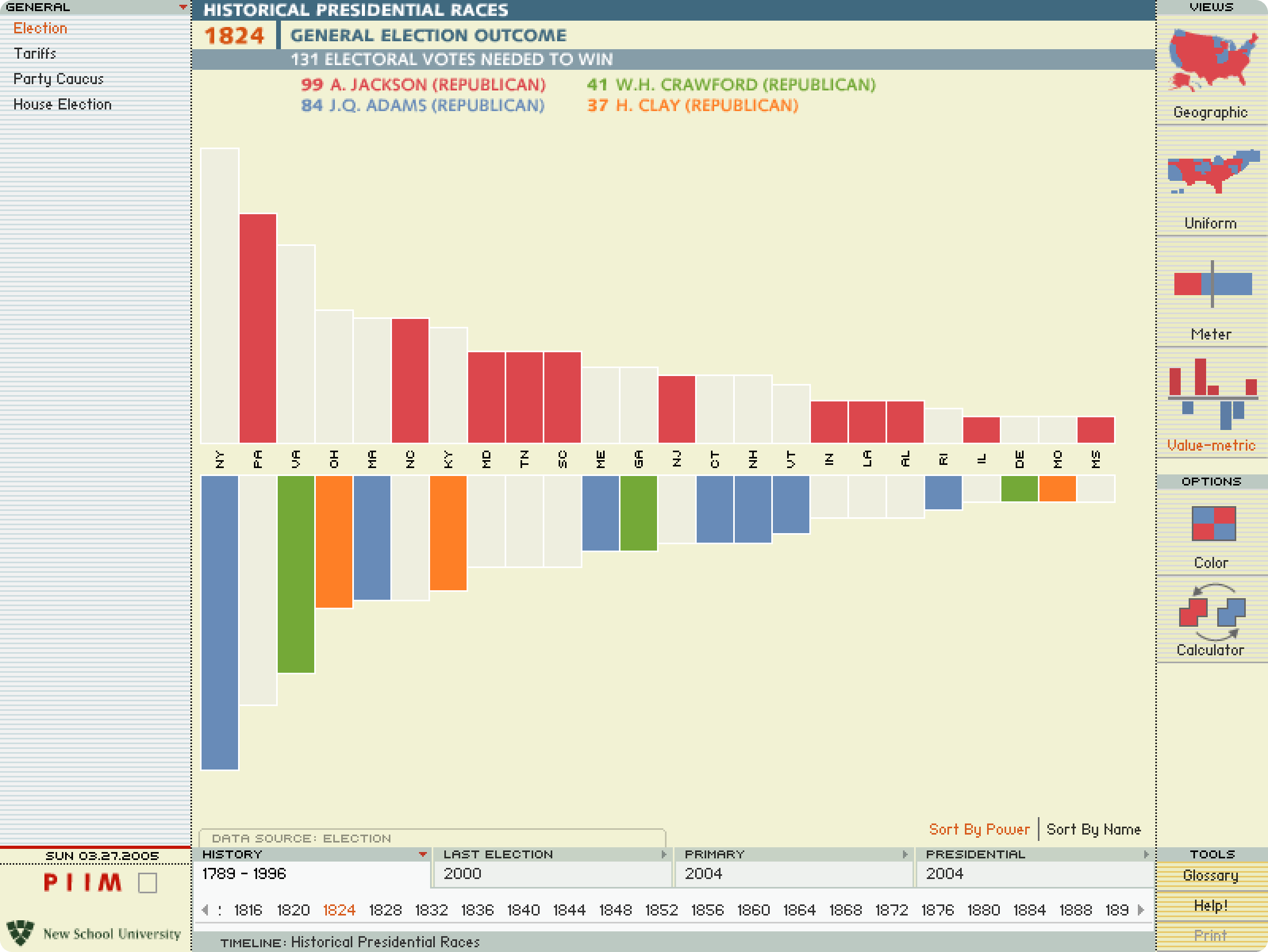 Approximately one-third of all delegates to the presidential nominating conventions can be won on Super Tuesday, more than any other day. Therefore, the results on Super Tuesday are a strong indicator of the likely eventual nominee of each political party. With a timeline view, you can experience the before, during, and after events of how the Caucus unfolds. 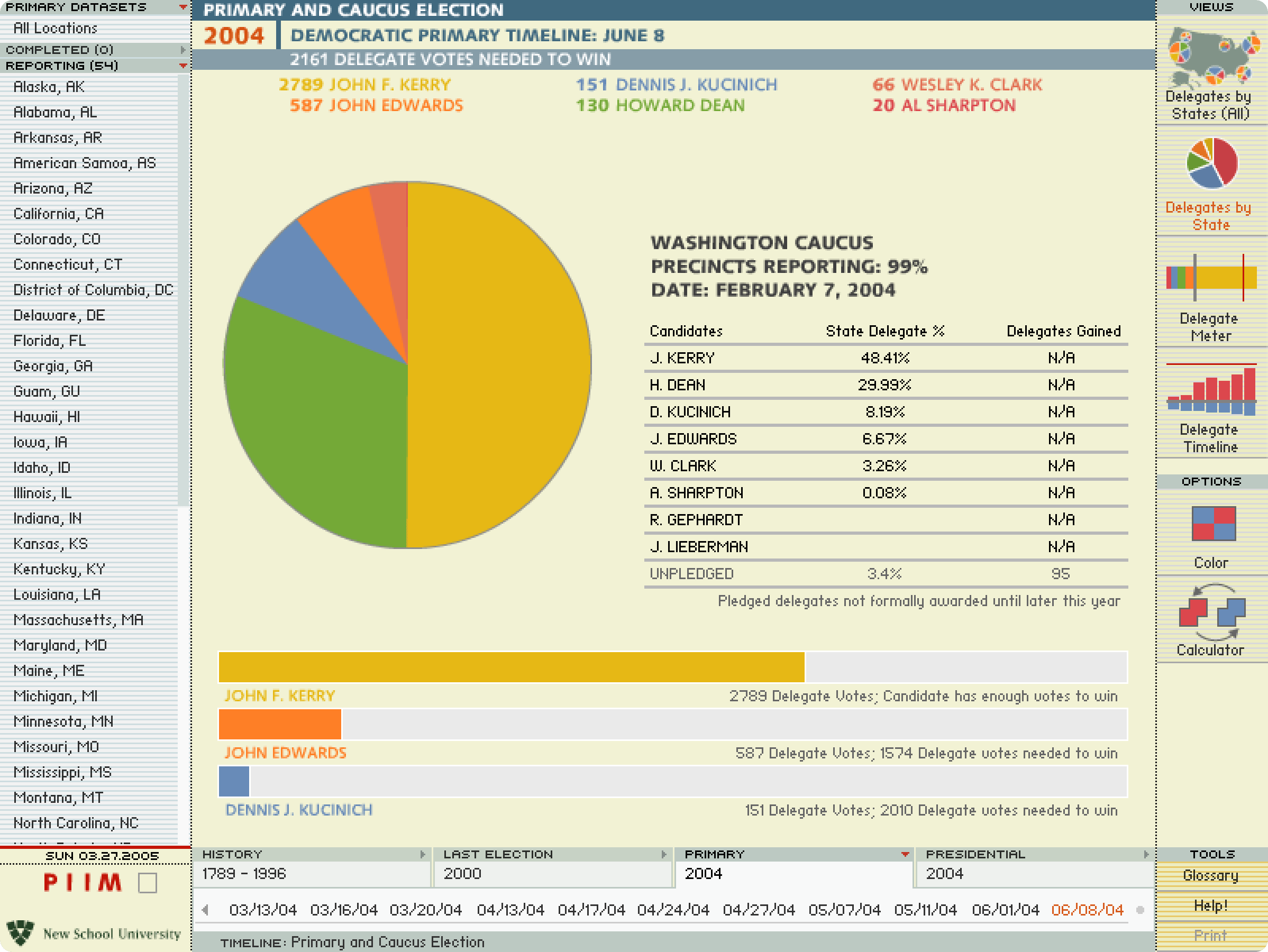 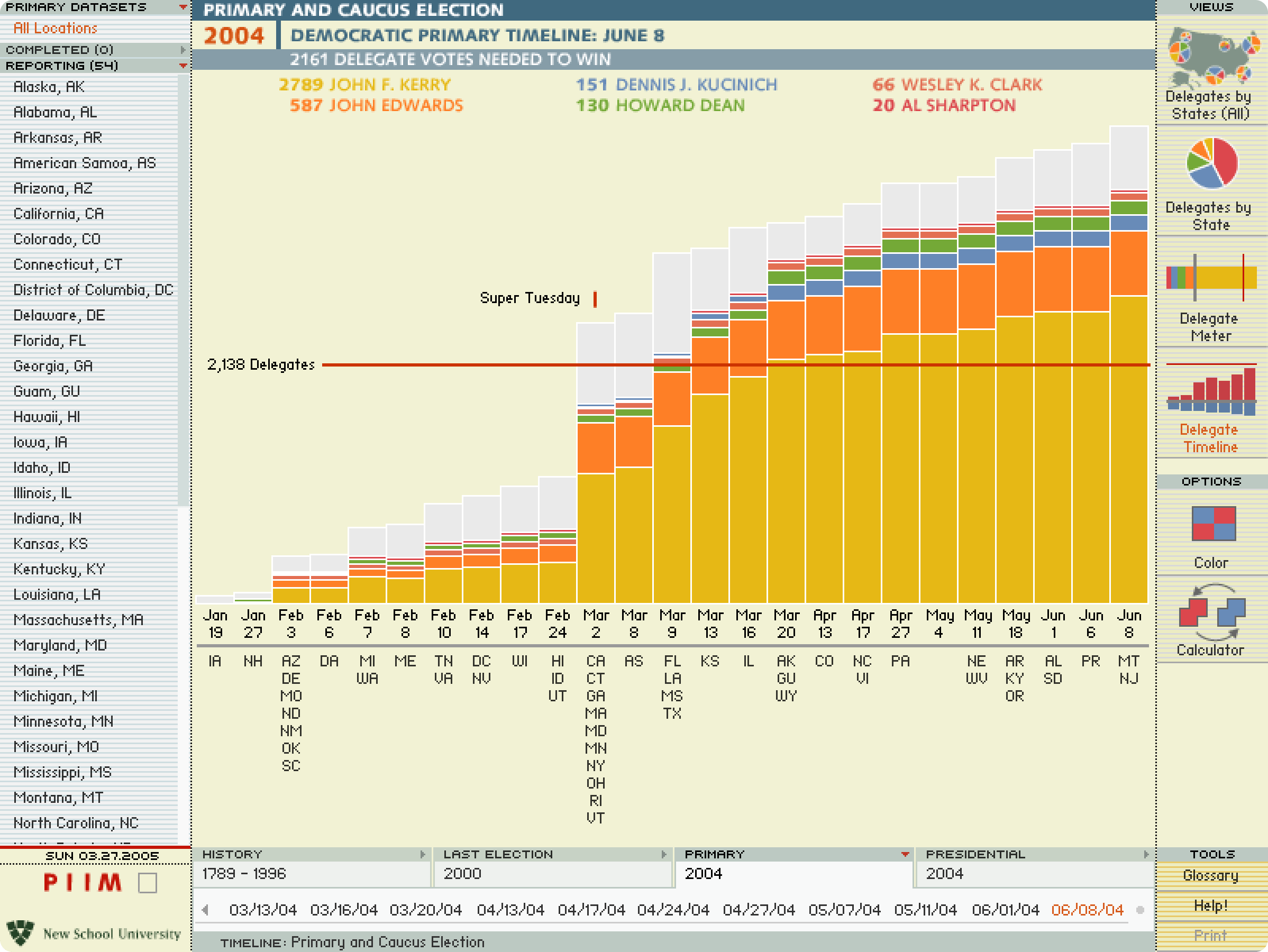 Comprehensive documentation of public opinions and issues for every election back to 1789. 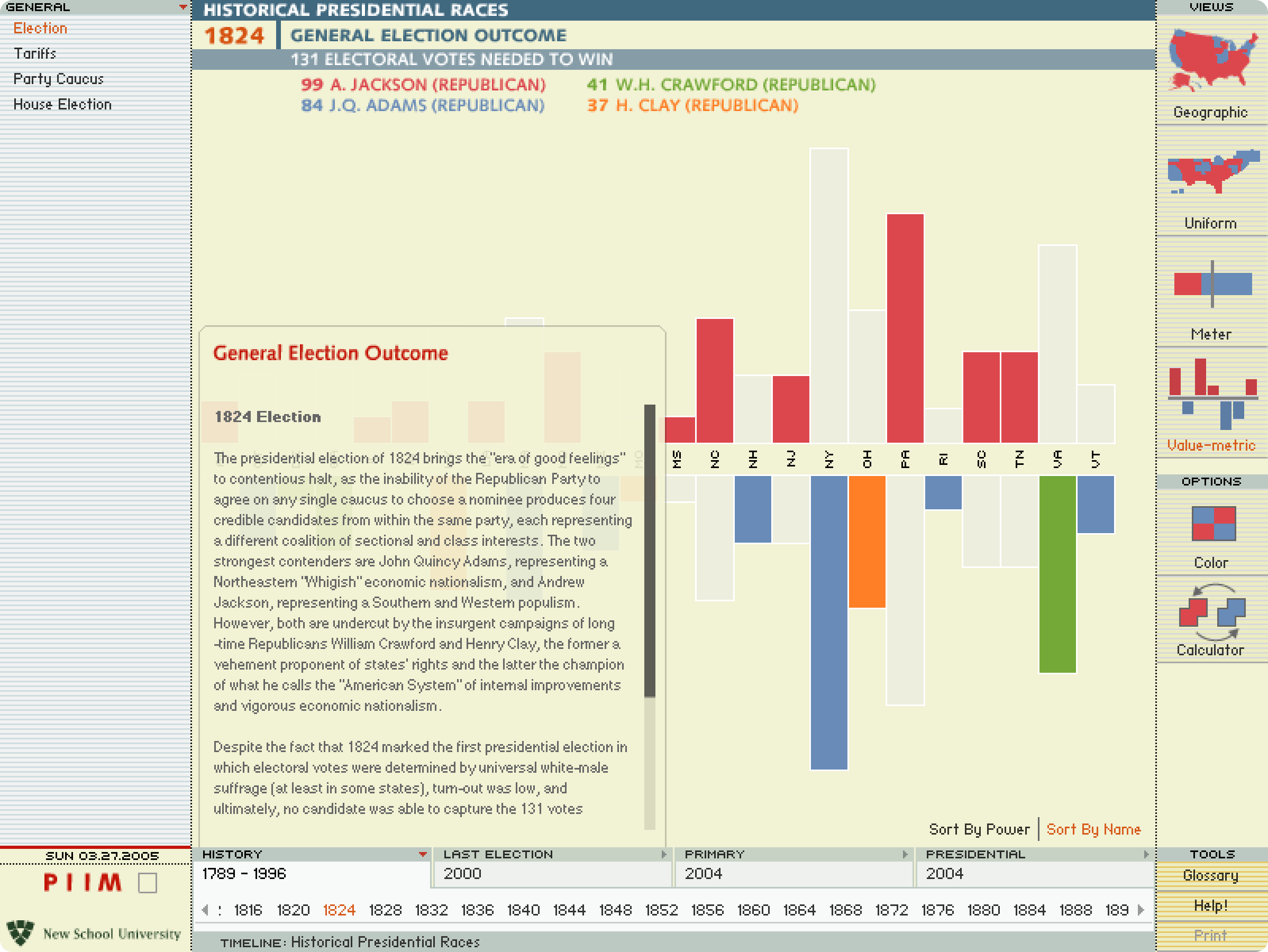 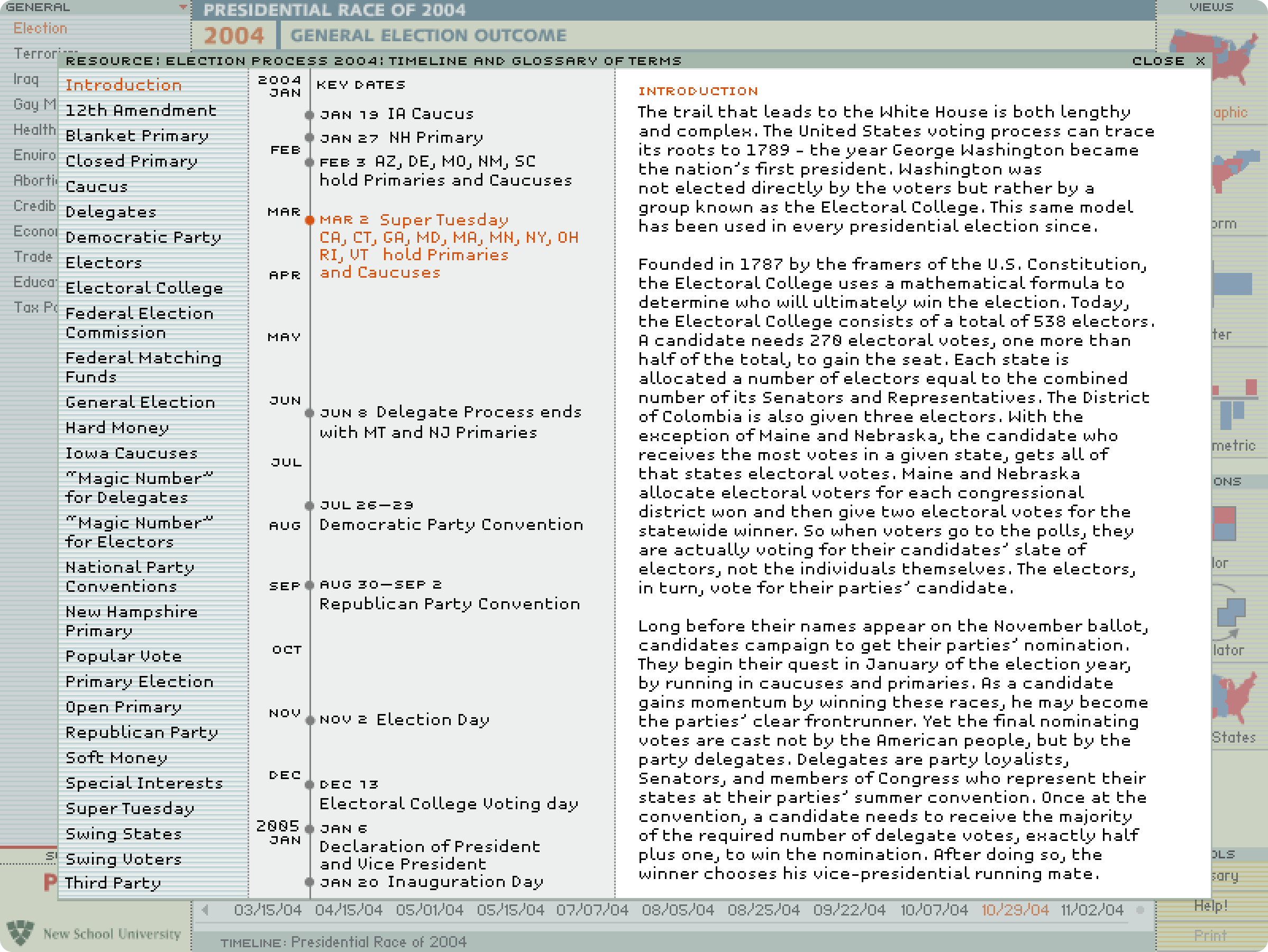